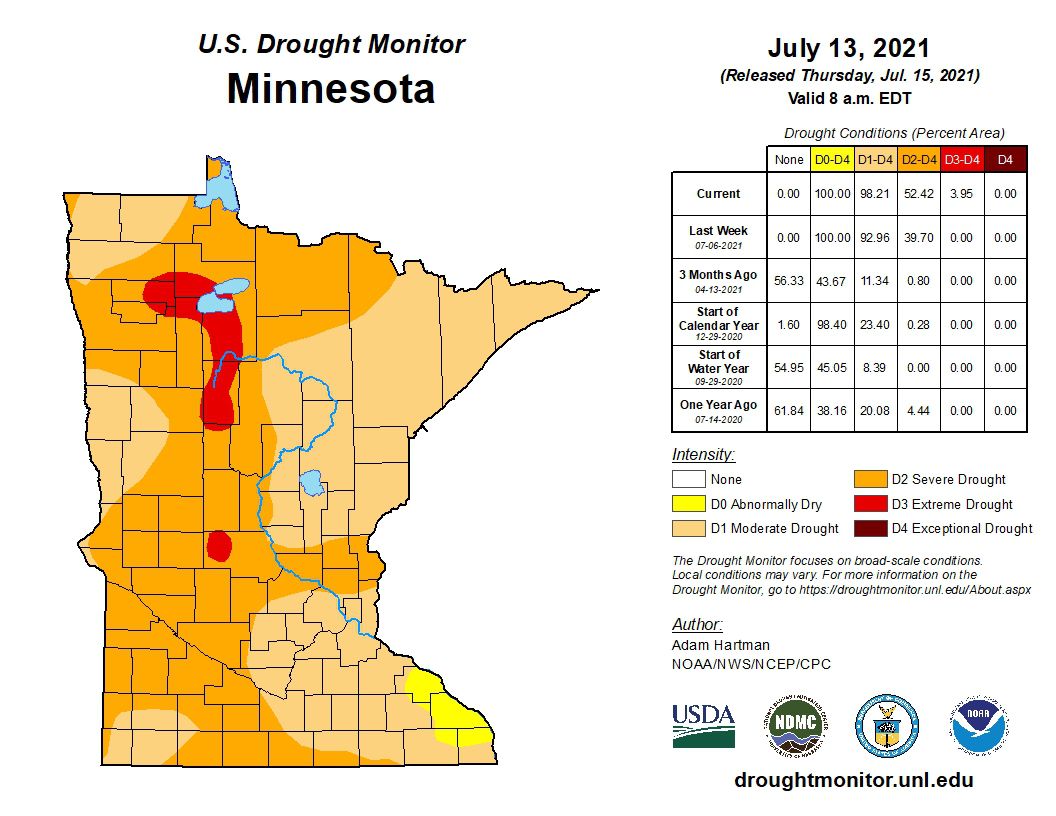 It has been a hot and dry year so far, with much below average rainfall across much of the region. Here is the average precipitation since January 1, which shows several areas several inches below average. 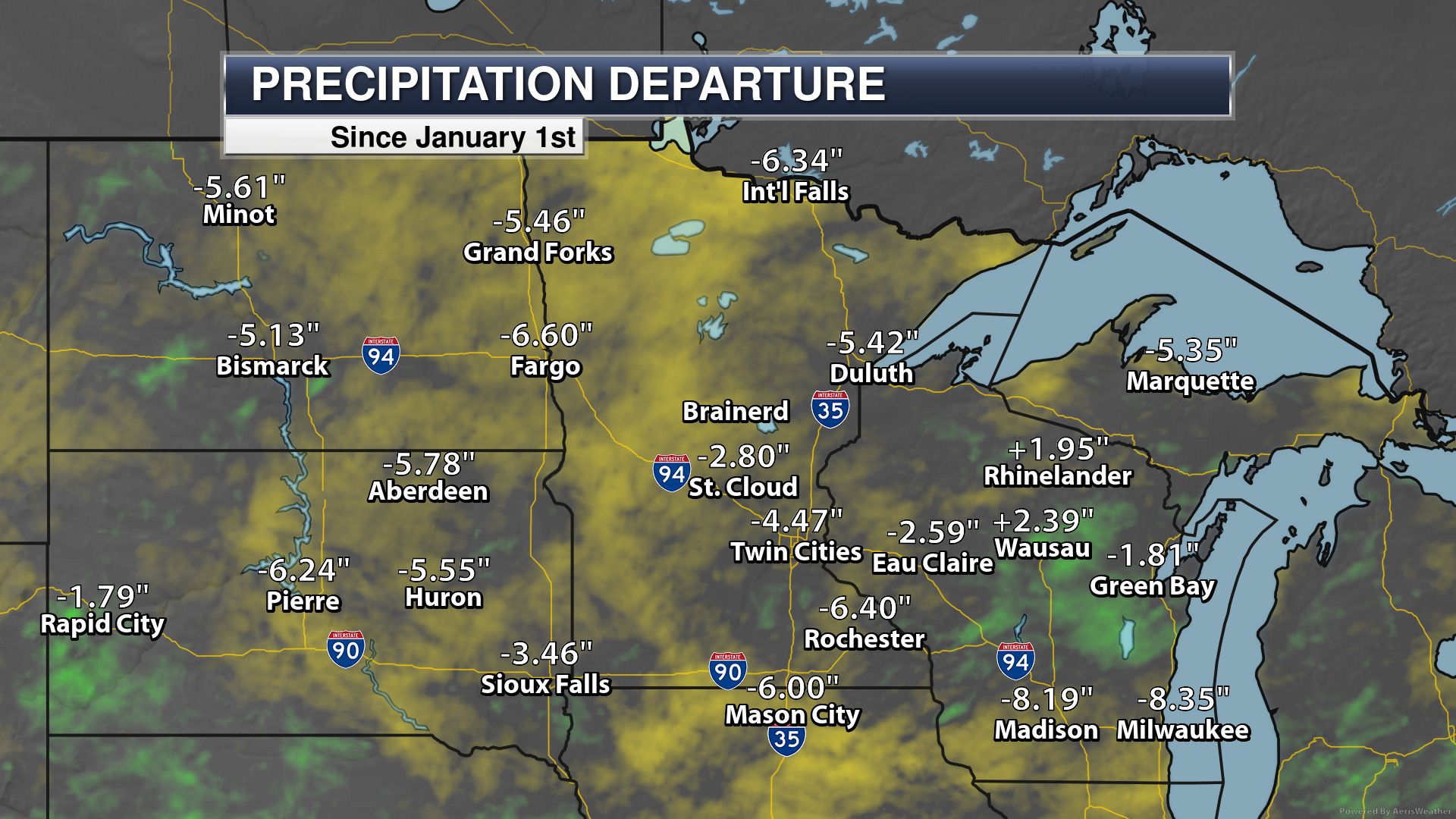 The weather forecast for the Twin Cities on Sunday again shows dry and hot conditions in place. However, several forest fires burning in Canada and the western United States will create smoke / haze conditions near us. Look for red / orange sunrises and sunsets over the next few days.

Meteograms for Minneapolis on Sunday will be hot again with highs warming in the mid-1980s with a hazy sun in place. Winds will be southerly at around 5 to 15 mph. 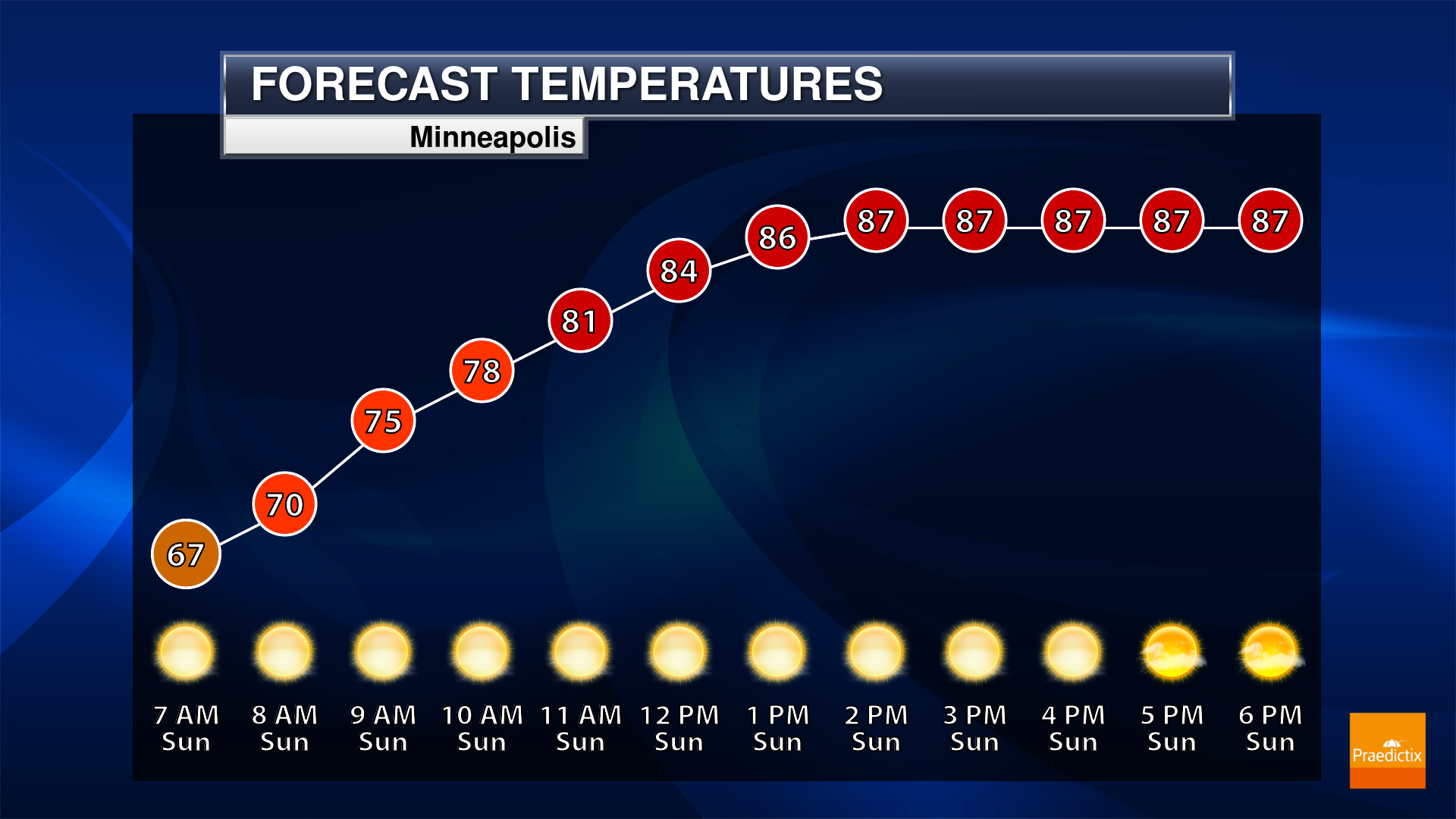 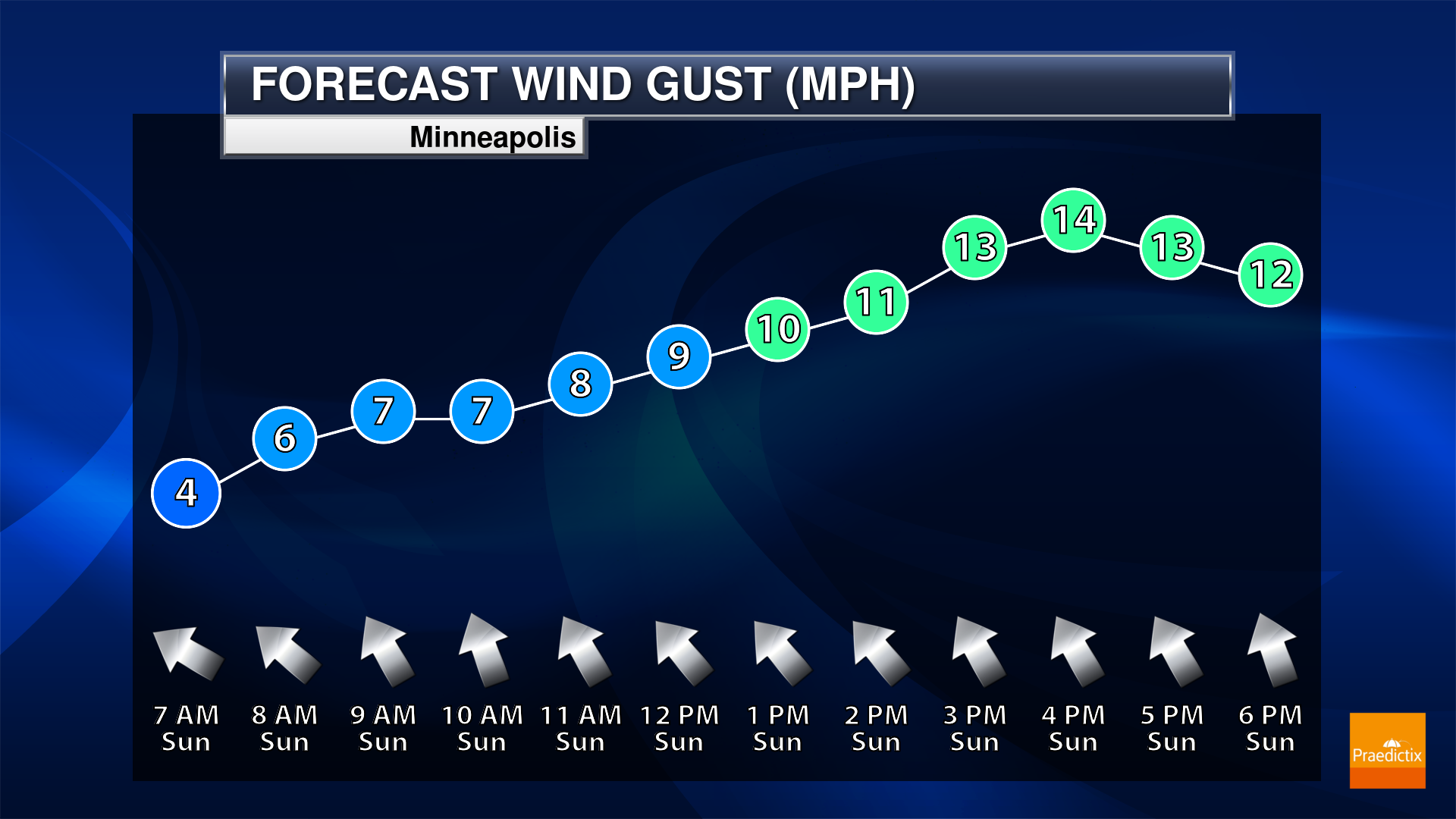 Weather forecast for the region on Sunday shows dry and mild weather across much of the region with highs warming in the upper 80s and 90s, which will be near + 5F to + 15F above average with a smoky / hazy sun. 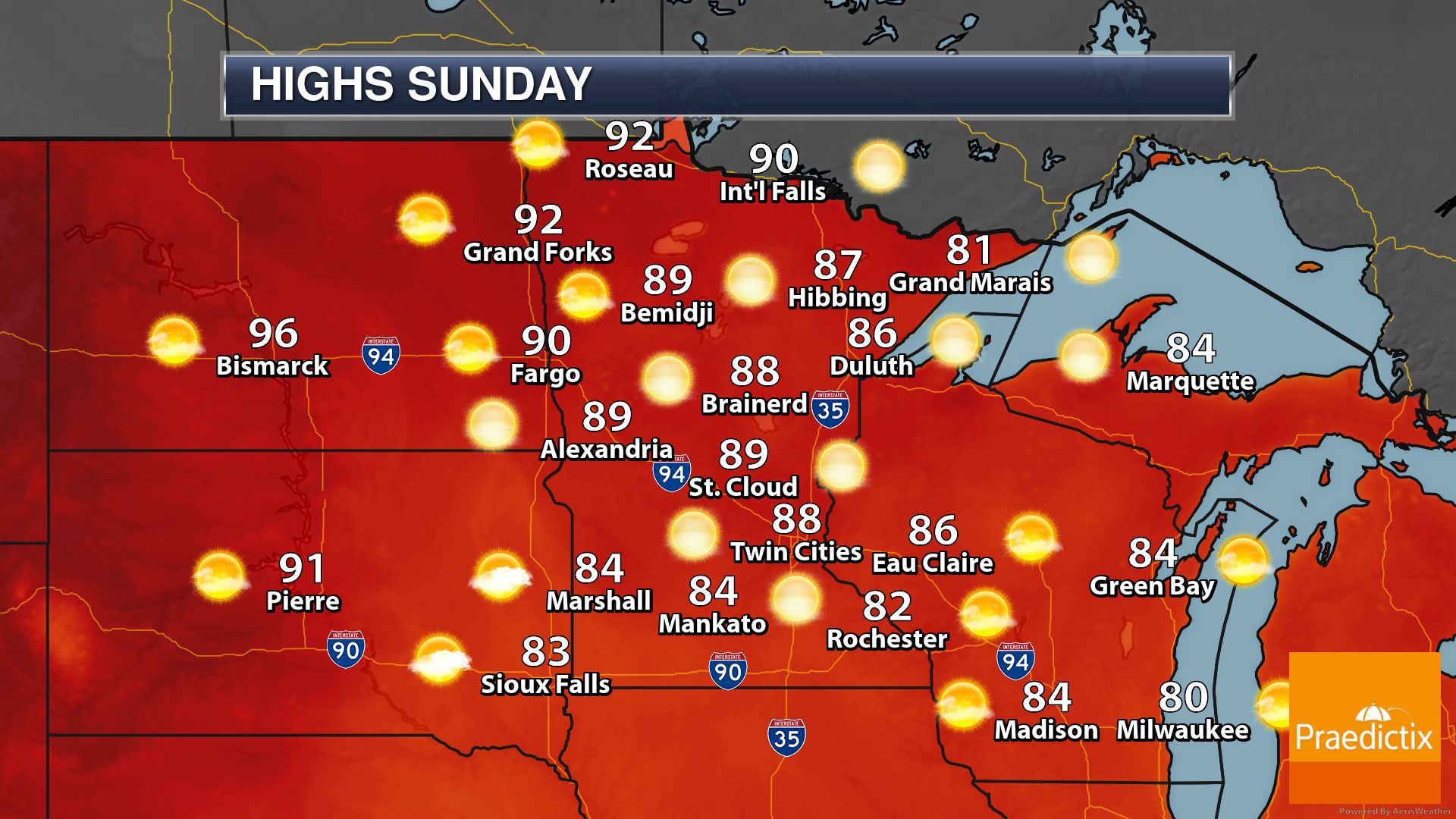 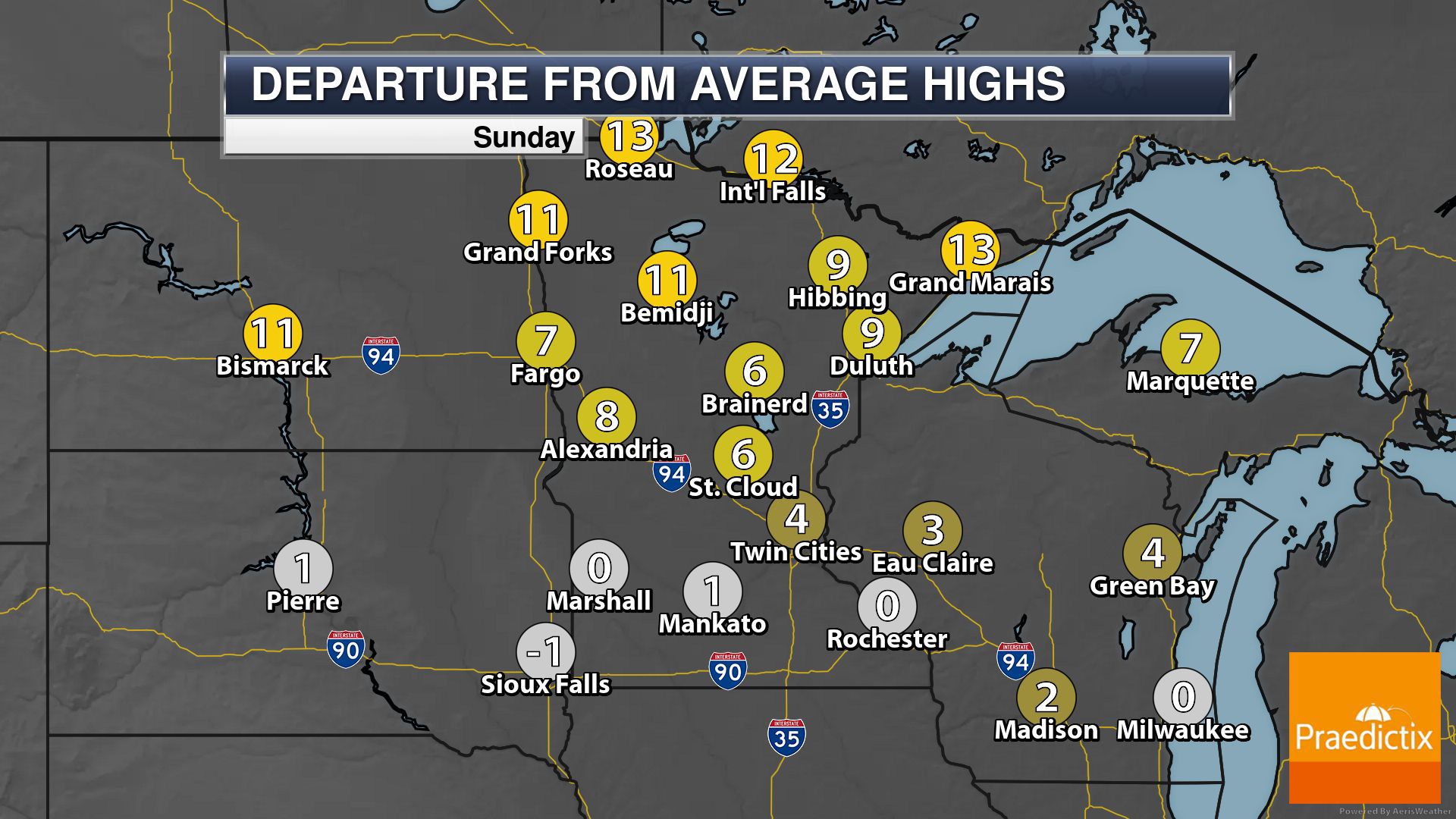 The extended weather forecast for Minneapolis shows temperatures to warm again above average levels for several days until next week. Keep in mind that we’ve already had (14) 90 degree days in the Twin Cities so far this year, so we’ll probably be adding a few more days over the next 5-7 days. 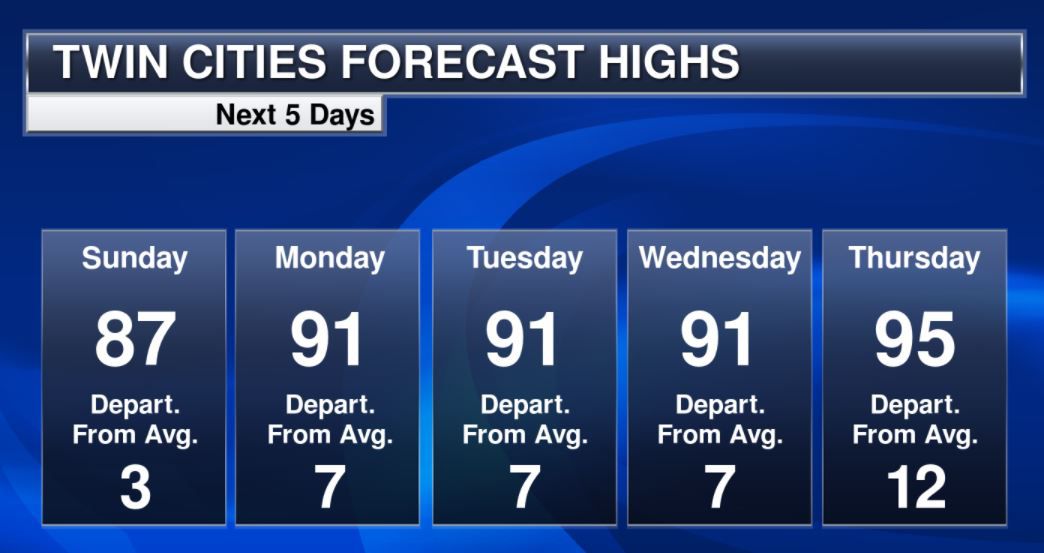 Here is the extended weather forecast for next week, which shows a few isolated showers and storms in parts of the region. It doesn’t look like anything is very prevalent, but locally there will still be heavy pockets of rain in a few places.

Here’s the potential for precipitation through 7 p.m. Monday in the Midwest, which shows areas of rain across the plains, the central part of the country, and parts of the Ohio Valley. However, much of the Upper Midwest will be dry. 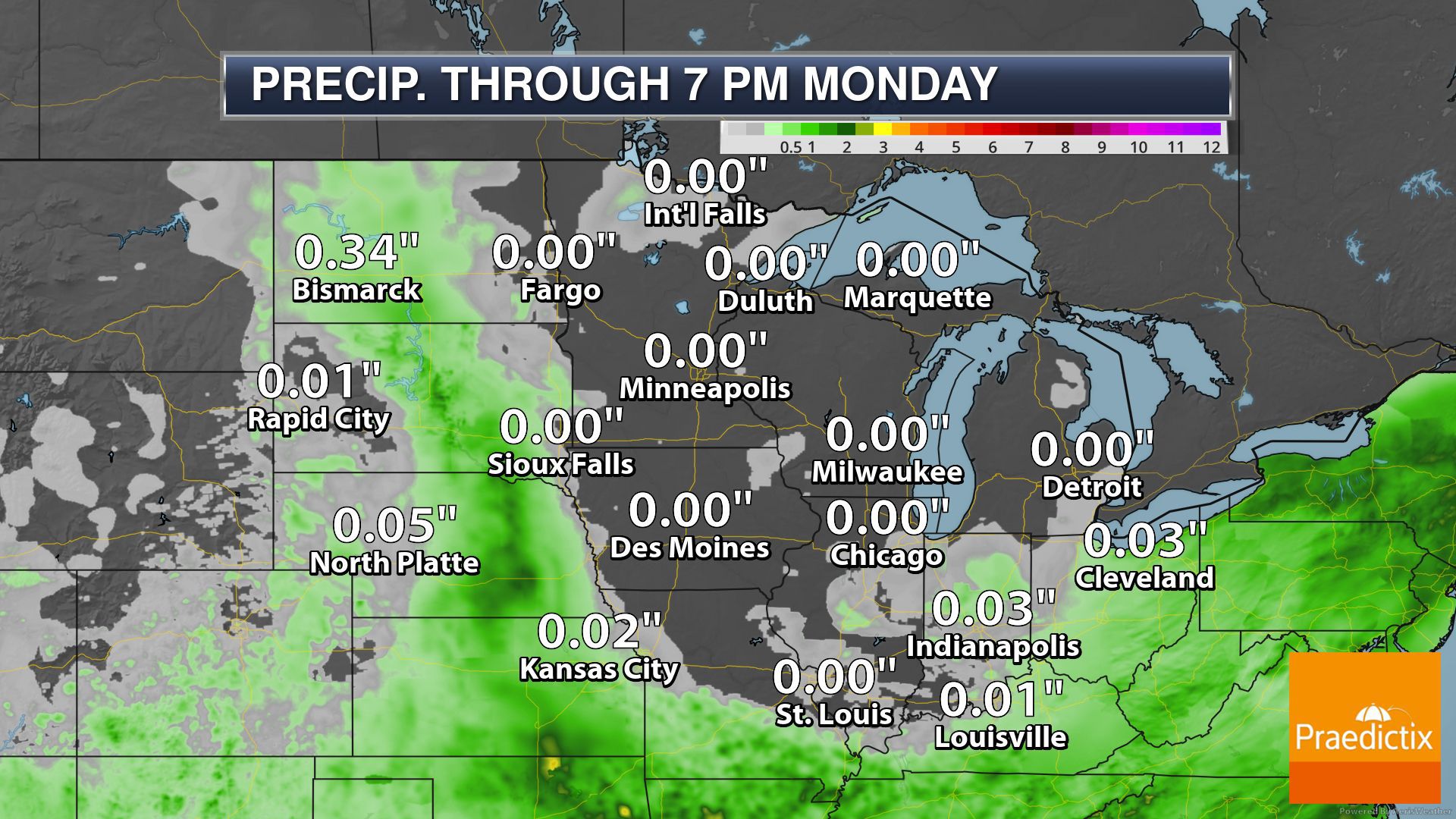 According to the NOAA Climate Prediction Center, the 8- to 14-day temperature forecast shows warmer-than-average temperatures continuing across much of the northern part of the country. Meanwhile, temperatures in the northeast and southwest will be cooler than average.

Are we in a climate emergency? If you don’t believe the scientists, do you believe your own eyes? We’ve always had extremes, but a 121F capable heat dome in BC and staggering flooding across Europe amazes meteorologists.

New times may require new tools. The â€œaverage weatherâ€ is changing – many Americans today don’t even realize they now live in a (new) floodplain. Drought, fires and water shortages in the West are impacting jobs and economic growth, as symptoms of warming accelerate.

Some scientists worry that current climate models may not even be able to track a proliferation of extreme events. Expect to see things you haven’t seen before.

Heatwaves will break off the last drop of smoldering air over the Rockies and the western United States, giving us a series of 90s this week. Thunder could rumble on Tuesday, again Saturday, but no widespread relief from the drought is likely anytime soon.

Wet ones become more and more humid. The dry ones are getting drier and drier. I miss the average.

2003: At least eleven tornadoes have hit Minnesota. Baseball-sized hail has been reported in Indus, Koochiching County. 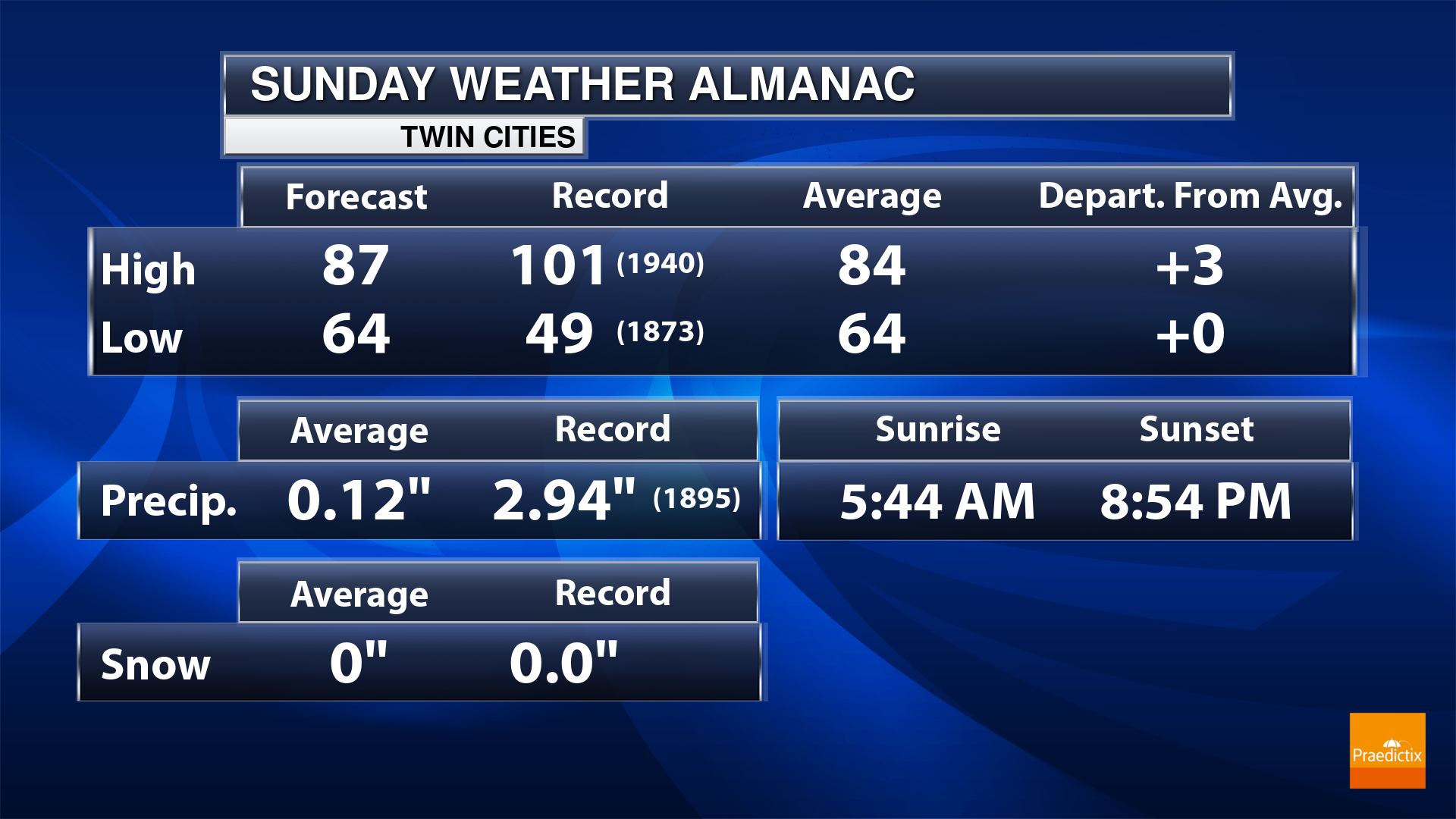 2.1 Before the first quarter moon

â€œJuly is a great time of year to learn to recognize the constellation Scorpio the Scorpio. If you’re in the city – without a dark sky – you probably won’t see the entire constellation. But you can still see the star that represents the Heart of Scorpio, a bright red star called Antares. Our graph shows the nights of July 19, 20 and 21, 2021, when the moon will approach this star and then pass it. Watch the moon these nights! Despite its brilliance, the red color of Antares could be noticeable. Once the moon leaves the evening sky and you have a dark sky, you can easily see the graceful shape of the constellation Scorpio of Antares. The constellation is shaped like J. From the northern hemisphere, the lower half of Scorpius – the curved part of the J – is close to the southern horizon when Scorpius is highest in the sky, as is the case with July evenings. “ 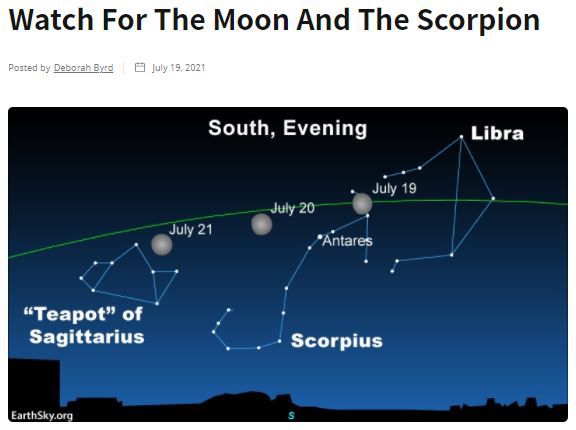 Sunday’s weather forecast shows warm temperatures in place in the high plains and western inter-mountain, while temperatures also and east of the Rockies will be near or cooler than average. 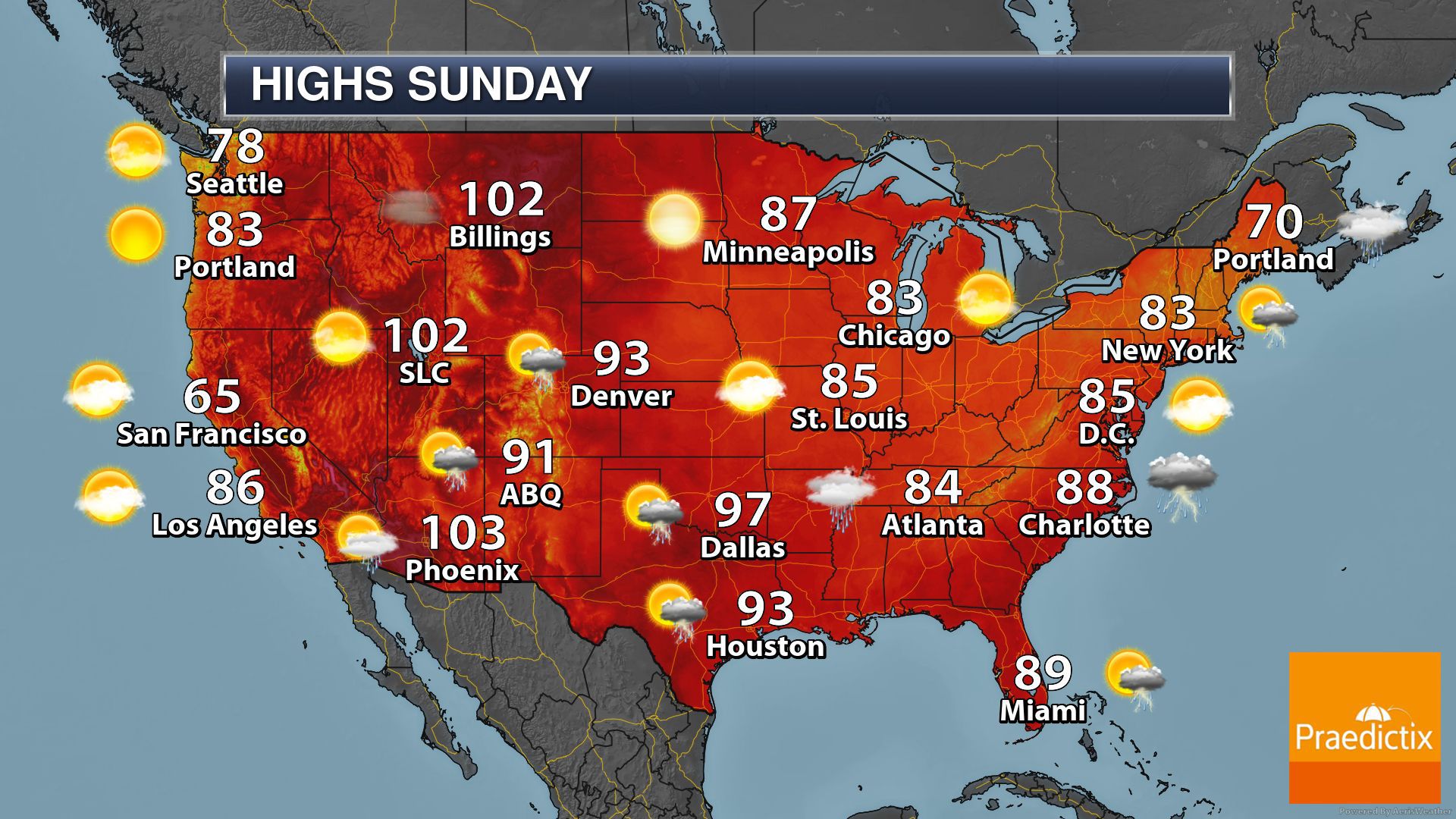 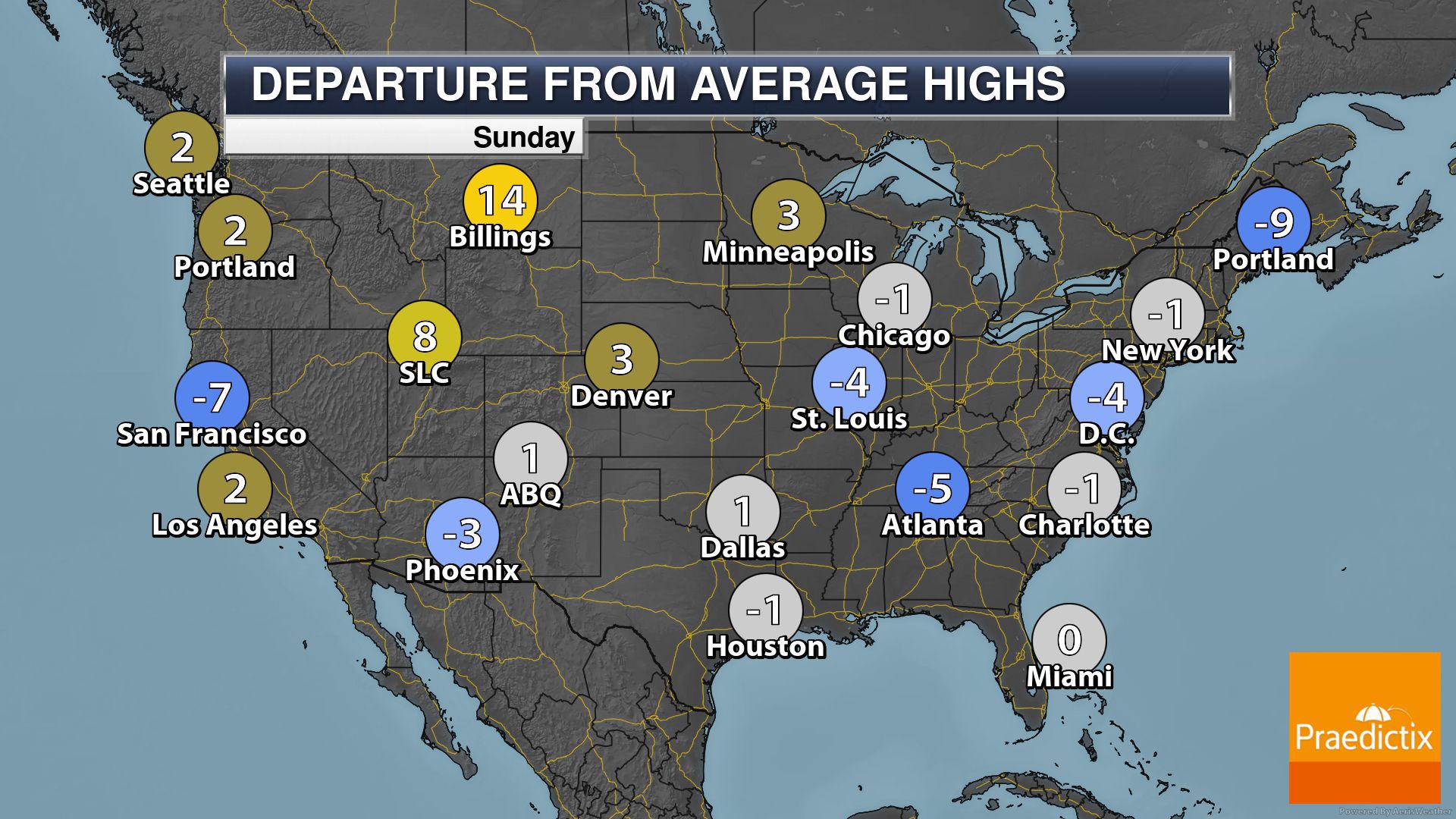 National weather forecasts for the remainder of the weekend and early next week keep most of the unstable weather conditions in the southern part of the country with locally abundant pockets of rain.

“The black smoke that blanketed northern California from the 2018 camp fire contained extreme levels of lead and other toxic metals, according to a new study by the state air regulator. As summer wildfires hit the drought-stricken western United States, the new findings sound the alarm bells about the risk of unanticipated health impacts such as cancer and learning deficits. Parts of California, such as the city of Chico, saw lead concentrations briefly reach 50 times the average level, according to the California Air Resources Board study. “This report makes it clear that smoke from wildfires poses a real threat to the health of not only people living and working near these fires, but also anyone affected by the smoke as they travel through California and beyond. beyond, â€said Richard Corey, chief executive of the agency. , in a press release. “

The entire American coastline is threatened by the lunar cycle and climate change. Climate change has already increased the frequency and severity of hurricanes and other extreme weather events around the world. – But there’s a smaller, less splashing threat on the horizon that could wreak havoc on America’s shores. High tide flooding, also known as ‘nuisance flooding’, occurs in coastal areas when the tides reach about 0.6 meters above the daily average high tide and begin to flood streets or seep into them. storm sewers. True to their nickname, these floods are more of a nuisance than outright calamity, inundating streets and homes, forcing businesses to shut down and causing sumps to overflow – but the longer they last, the more damage they can cause. The United States experienced more than 600 of these floods in 2019, according to the National Oceanic and Atmospheric Administration (NOAA). But now, a new study by NASA warns that harmful flooding will become much more frequent in the United States by the 2030s, with the majority of the American coastline expected to experience three to four times as many flood days at high tide. every year for at least a decade.

The shadings and percentages in the subplots are the fractions of area that will experience a significant increase in precipitation (left) and runoff (right) in the unconstrained (blue) and constrained (red) projections. Credit: IAP Climate projections are essential for adaptation and mitigation planning. Results from the latest cycle of the Coupled Model Intercomparison Project, Phase […]

LOS ANGELES (CBSLA) – A climate-focused nonprofit has shown in models how some 50 cities around the world could potentially change or even disappear due to climate change. “Their ability to exist in the future depends on the actions we take,” said Benjamin Strauss, CEO of Climate Central. Strauss’ nonprofit, Climate Central, did the research […]

According to an international team of researchers from 17 countries. The results published last week in nature geoscience are based on observational evidence of three warm periods over the past 3.5 million years, when the world was 0.5°C to 2°C warmer than pre-industrial temperatures in the 19th century. The research has also revealed how large […]