Currently, climate modeling is only accessible to a privileged few. As computing has become more sophisticated in recent decades, financial and practical hurdles have made grasping the complexity of how climate change could impact Earth’s systems out of reach for most. researchers.

However, one of the biggest companies in the world is trying to democratize the process. Amazon.com Inc.’s Sustainability Data Initiative is launching a one-of-a-kind partnership with nonprofit SilverLining and the National Center for Atmospheric Research on Tuesday, which will make climate model simulations available in the cloud, potentially expanding the club of researchers with access to these data to include those from small coastal or island countries already affected by climate change.

“Even in the United States and in Western countries, computational capacity is one of the biggest hurdles where we don’t understand the climate system faster,” Kelly Wanser, executive director of SilverLining, said in an interview. “And it is also a problem of power disparity, because only certain countries have access to this kind of capacities.”

Dr Ana Pinheiro Privette, responsible for Amazon Sustainability Data Initiative, added that putting the models in the cloud “eliminates the cost of acquisition by making the data freely available” and “minimizes the need to store multiple copies of the data, which decreases the carbon footprint of climate research.”

The e-commerce giant’s initiative will allow NCAR to use technology and technical support from Amazon Web Services to run a collection of 30 model simulations from 2035 to 2070. The process will use two NCAR models – the Community Earth System Model Version 2 and the Whole Atmosphere Community Climate Model – operating under a median warming scenario.

The UK Meteorological Office will then replicate the model simulations, and the associated simulations will use the model from NASA’s Goddard Institute for Space Studies. The datasets resulting from these analyzes will be freely available to researchers around the world.

“Cloud hosting of climate model simulations can accelerate the pace of science and allow much wider access and more meaningful collaboration with researchers around the world,” said Jean-François Lamarque, director of the Laboratory of climate and global dynamics from NCAR, in a statement. declaration.

The resulting open-source dataset will allow research teams around the world to circumvent one of the main obstacles to specialized climate modeling, even for those who have the computational capacity to do so: cost. . Wanser said running the 30 simultaneous simulations would normally cost around $ 700,000 and take two months.

The AWS program will cover all costs associated with hosting and sharing data from the cloud, and access and download will be free. Grants will be available for users who choose to analyze or run additional models on AWS.

The planned simulations will be run at a resolution of 100 kilometers (that is, each pixel in the resulting earth model will be 100 square kilometers), Wanser said; a higher resolution simulation (eg 10 km) would take up to 100 times more computing capacity.

Wanser said AWS, SilverLining and NCAR plan to finalize the data within six months. In the future, the three hope to make more global climate models and datasets accessible through the cloud, according to the press release.

“Traditionally, researchers and climatologists have not been able to bring their expertise, perspectives and concerns to the solutions space,” Privette said. “Climate change is a global and complex problem, so having a greater diversity of thoughts and knowledge will help us build stronger solutions. “

This is reflected in the experience of Dr Chris Lennard, a senior researcher at the Climate System Analysis Group at the University of Cape Town, who said in a statement that his ability to study severe droughts and other climate impacts occurring locally is “limited by local computing resources.” and networks.

“Open access to models and datasets, as well as high-performance cloud-based computing environments to work with them, allows us to engage as researchers as well,” he added, “ and to design and carry out studies to help people in our part of the world. that were not conceivable in the past.

Correction: Due to inaccurate information provided to Morning Consult, the original version of this story contained the wrong year in which the 30 model simulations will begin. The story has also been updated to include comments from AWS’s Ana Pinheiro Privette and to clarify the name of NASA’s climate model.

Letter to the editor: Russian climate models are more accurate for forecasting purposes 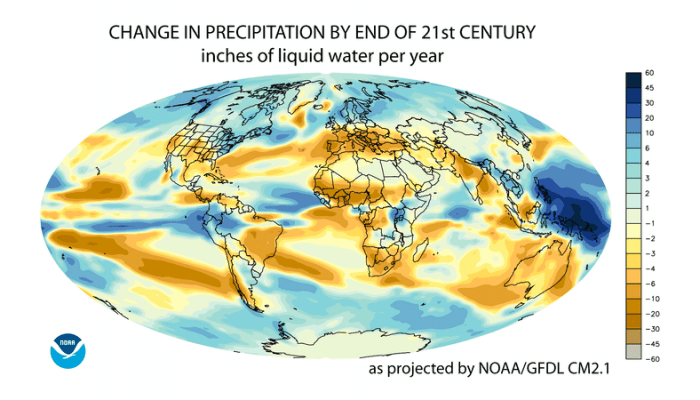