Three scientists were awarded the Nobel Prize in Physics on Tuesday for essential work in understanding how the Earth’s climate is changing, identifying the effect of human behavior on these changes and ultimately predicting the impact of global warming.

The winners were Syukuro Manabe from Princeton University, Klaus Hasselmann from the Max Planck Institute for Meteorology in Hamburg, Germany, and Giorgio Parisi from Sapienza University in Rome.

Others have received Nobel Prizes for their work on climate change, including former US Vice President Al Gore, but the Royal Swedish Academy of Sciences said this was the first time the physics prize was awarded specifically to a climatologist.

“The findings recognized this year demonstrate that our knowledge of climate has a solid scientific basis, based on rigorous analysis of observations,” said Thors Hans Hansson, chairman of the Nobel Committee for Physics.

Complex physical systems, like climate, are often defined by their disorder. This year’s winners helped understand what appeared to be chaos by describing these systems and predicting their long-term behavior.

In 1967, Dr Manabe developed a computer model that confirmed the critical link between the main greenhouse gas – carbon dioxide – and global warming.

This model paved the way for more and more sophisticated ones. Dr. Manabe’s subsequent models, which explored the links between ocean and atmospheric conditions, were crucial in recognizing how the increased melting of the Greenland ice sheet could affect ocean circulation in the North Atlantic. , said Michael Mann, a climatologist at Pennsylvania State University.

“It has fundamentally contributed to our understanding of climate change and the dynamic human-caused mechanisms,” said Dr Mann.

About a decade after Dr Manabe’s foundational work, Dr Hasselmann created a model that relates short-term climate phenomena – in other words, rain and other types of weather – to long-term climate such as oceanic and atmospheric currents. Dr Mann said this work laid the groundwork for attribution studies, an area of ​​scientific research that seeks to establish the influence of climate change on specific events such as droughts, heat waves and torrential rains. intense.

“This underpins our efforts as a community to detect and attribute the impacts of climate change,” said Dr Mann.

Dr Parisi is credited with discovering the interplay of disorder and fluctuations in physical systems, including everything from a tiny collection of atoms to the atmosphere of an entire planet.

“The gist of his job is that he’s incredibly eclectic,” said David Yllanes, a researcher at Chan Zuckerberg Biohub, a nonprofit research center. “Many important physical phenomena involve collective behaviors that arise from fundamentally disordered, chaotic, even frustrated systems. A system that seems hopelessly random, if analyzed the right way, can give a robust prediction for collective behavior.

These ideas can help understand climate change, which “involves fluctuations resulting from the interaction of very many moving parts,” said Dr Yllanes.

But Dr. Parisi’s impact on climate science is small compared to his impact in many other fields, including math, biology, and computer science. It involves everything from lasers to machine learning.

Dr Manabe and Dr Hasselman will share half the cost of around $ 10 million. The other half will go to Mr. Parisi, whose job was largely separate from that of the other two. After the award was given, many climatologists said they were only marginally aware of Mr Parisi’s work – or had not heard of him at all.

Dr Manabe said in a telephone interview that five days ago a group of Japanese journalists contacted him saying they had heard a rumor that he would soon win the Nobel Prize. But he didn’t believe them.

Then, early this morning, he received a phone call from the Nobel Committee.

Three hours after the prize was announced, Dr Manabe said he was unaware he was sharing the prize with two other people. He praised Dr Hasselman’s work and how he built himself up, but said he didn’t know Dr Parisi.

After responding to the committee’s call, Dr Manabe analyzed the list of past physics prize winners, only to realize that this was the first time the prize had been awarded for climate science.

“I think they made a point of choosing something that is essential for the company,” he said.

The three scientists strive to understand the complex natural systems that have been driving climate change for decades, and their findings have provided the scaffolding on which climate predictions are built.

The importance of their work has only increased in urgency as forecasting models reveal increasingly gloomy prospects if the rise in global temperature is not stopped.

In August, the Intergovernmental Panel on Climate Change, or IPCC, a group of scientists convened by the United Nations, released a report showing that the nations of the world can no longer prevent global warming from intensifying. . The global average temperature will rise by 2.7 degrees Celsius by the end of the century, even if all countries meet the emission reductions promised under the Paris Agreement. This increase in temperature is likely to lead to more forest fires, droughts and extreme flooding, according to a United Nations report released in September.

The IPCC report says nations have a short window to reduce fossil fuel emissions and avoid worse future outcomes. And this work is based directly on the models of Dr Manabe.

“Today’s climatologists sit on the shoulders of these giants, who laid the foundation for our understanding of the climate system,” said Ko Barrett, senior climate advisor at the National Oceanic and Atmospheric Administration, who is also vice-chairman of the IPCC.

Robert Kopp, a climatologist at Rutgers University who also worked on the IPCC report, called Dr Manabe a critical figure in the rise of climate science in the mid-1960s.

“He took the weather models that were starting to emerge in the period after World World II and turned them into the first climate models,” he said.

Piers Forster, a climatologist at the University of Leeds in England, called Dr Manabe’s 1967 article detailing these models “arguably the greatest climate science article of all time.”

Dr Barrett also praised Dr Hasselmann and Dr Parisi for developing this work and commended the Nobel Committee for showing the world that climate studies today are based on decades of scientific work. “It is important to understand that climate science rests on fundamental foundations of physics,” she said.

Who are the winners?

Dr Manabe is a meteorologist and senior climatologist at Princeton University. Born in 1931 in Shingu, Japan, he obtained his doctorate. in 1957 from the University of Tokyo before joining the US Weather Bureau. In the 1960s, he conducted groundbreaking research into how increasing levels of carbon dioxide lead to higher temperatures on the Earth’s surface. This work “laid the foundations for the development of current climate models”, according to the Nobel judges.

Dr Hasselmann is a German physicist and oceanographer who dramatically advanced public understanding of climate change through the creation of a model that links climate and chaotic weather systems. He is a professor at the Max Planck Institute for Meteorology in Hamburg. He got his doctorate. in 1957 from the University of Göttingen in Germany before founding the meteorological institute which he directed until 1999. He is also the founder of what is today known as the Global Climate Forum. In 2009, Dr Hasselmann received the 2009 BBVA Foundation Frontiers of Knowledge Award in Climate Change.

Dr Parisi is an Italian theoretical physicist born in Rome in 1948, whose research has focused on quantum field theory and complex systems. He got his doctorate. from La Sapienza University in Rome in 1970. In 1980 he was responsible for the discovery of hidden patterns in complex messy materials. He is a professor at La Sapienza University in Rome.

Referring to the climate change forecast at a press conference after the award was announced, Dr Parisi said: “It is clear that for the next generation we need to act very quickly now. 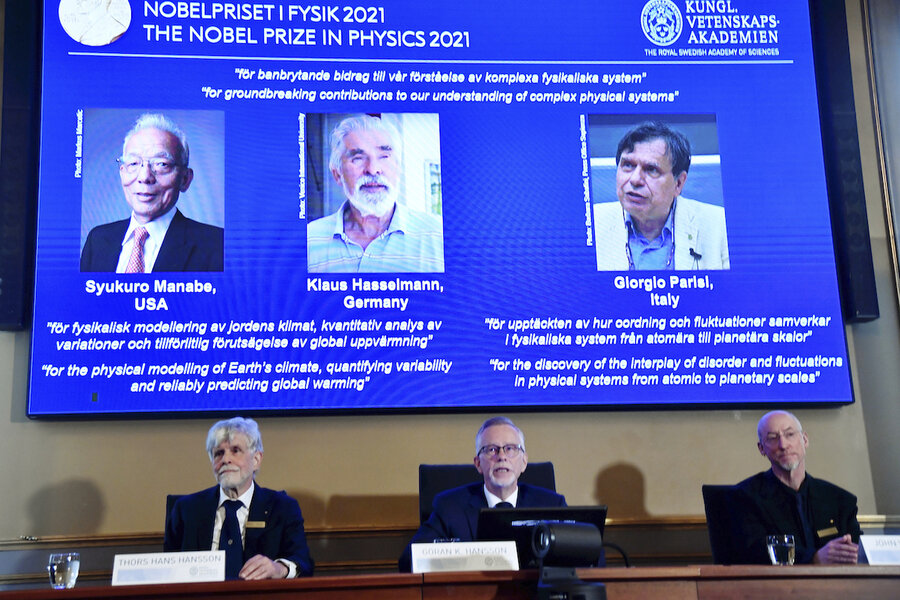 How Climate Models Got So Accurate They Won A Nobel Prize