The book: The weather demon (Cambridge University Press) takes the complex science and research behind climate models and makes them accessible to the general public. Ramalingam Saravanan *90, an expert in the mathematical and physical aspects of the climate system, takes readers by the hand to explain how to interpret and use the predictions provided by climate models. While models don’t have all the answers, Saravanan argues they are a valuable tool in tackling climate change. 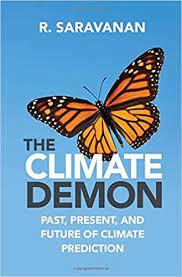 The author: Ramalingam Saravanan *90 is a professor and chair of the Department of Atmospheric Sciences at Texas A&M University. A climatologist with a background in physics, Saravanan’s use of climate models has made him a primary climate researcher for more than 30 years. He got his doctorate. in Atmospheric and Oceanic Sciences from Princeton University and his MSc in Physics from the Indian Institute of Technology, Kanpur.

Our climate prediction story begins in historic Princeton, New Jersey. The city was the site of a battle during the Revolutionary War; after the war, in 1783, Princeton served for four months as the provisional capital of the United States. Today it is best known as the home of Princeton University. Through downtown runs Nassau Street, which began as part of a Native American trail that later became a stagecoach route between New York and Philadelphia. This street marks the boundary between “town” and “dress”: to the north lives the general population of Princeton, and to the south is the picturesque campus of Princeton University with its neo-Gothic architecture.

On the north side of Nassau Street, across from the university, is a wonderful independent bookstore called Labyrinth Books. Here, for the affordable price of $7.95, you can buy yourself an entire year of weather and climate forecasts. These forecasts can be found in the annual edition of a small book entitled Old Farmer’s Almanac, which has proudly provided this service every year for more than two centuries. For each of the eighteen different regions of the United States, the almanac lists quantitative forecasts of average temperature and precipitation for each month of the year, as well as qualitative weather forecasts for individual periods within those months. The almanac even features a cleverly placed hole in its upper left corner so it can be hung on a nail in the barn or outhouse, allowing for convenient reading of its weather-related folk articles and charts.

Historically, the almanac used a secret formula for weather forecasting, devised in 1792 by its founder, Robert B. Thomas. This formula is based on the premise that “nothing in the universe happens by chance, that there is a pattern of cause and effect for all phenomena”. Thomas believed that the sun had an effect on Earth’s weather, and he credited Italian astronomer Galileo Galilei’s study of sunspots in the 17th century as a key part of his secret formula. Farmers – the almanac’s first target customers – needed to know, for example, when the first snow of the year would fall in order to plan their harvests. Even city dwellers could benefit from prior knowledge of sunny days when planning a wedding or picnic. The almanac’s longevity demonstrates its success in meeting the practical needs of farmers and city dwellers over the years. But the venerable almanac has competition in the folk prediction market: Since 1887, a groundhog named Phil has been prophesying the onset of spring in the town of Punxsutawney, Pennsylvania. We will get to know this hairy forecaster later.

For decades, while the Old Farmer’s Almanac and, later, Punxsutawney Phil making his prognoses, the “dress” part of Princeton – the scientists in the ivory towers of the university – remained largely silent on the subjects of weather and climate forecasting. This began to change in the late 1940s with the invention of the digital computer.

Let’s walk south from Labyrinth Books through the college campus, past Nassau Hall (which served as the capitol building while Princeton was briefly the nation’s capital). We finally arrive at Jones Hall. This well-appointed building with carved oak paneling inspired by Oxford University colleges currently houses the departments of East Asian Studies and Near Eastern Studies. Let’s go back in time to 1931 when this building was built. It was then the new home of the mathematics department. It also had a different name, Fine Hall, after the beloved and respected math teacher Henry B. Fine. (The building’s name was changed to Jones Hall in 1969, when the Mathematics Department moved to a new building. This building inherited the name Fine Hall.)

One of the occupants of Fine Hall in 1931 was the man who helped design it, a mathematician named Oswald Veblen. Mathematics teachers were usually tasked with heavy teaching duties. Therefore, Veblen harbored a grand vision of a new science institute, a veritable ivory tower, in which professors would focus solely on research. He succeeded in persuading an educator named Abraham Flexner, who was already in the process of creating an institute of this nature, to locate it in Princeton. Known as the Institute for Advanced Study (IAS), it would grant renowned scientists lifetime appointments as professors, with no teaching responsibilities. There would also be a steady stream of short-term guest scientists at the institute.

Flexner, the founding director of the IAS, was a strong proponent of curiosity-driven research; he published an essay with the provocative title “The usefulness of useless knowledge”. He persuaded a wealthy New Jersey family, the Bambergers, to contribute the equivalent of $200 million to his project today. A permanent building was to be constructed for the IAS with these funds, approximately one mile from the main campus of Princeton University. In the meantime, however, Flexner needed to find a temporary office for the scholars who would make up the institute. Fine Hall was ideal for this purpose; new IAS members could interact with mathematicians already there, as well as physicists from the adjacent Palmer Physical Laboratory (now the Frist Campus Center).

Everything was settled and the IAS began operations at Fine Hall in 1933. Among its first recruits was the world-renowned physicist, Albert Einstein. Another was a young mathematician named John von Neumann, who published his first mathematical paper before the age of eighteen. Von Neumann, the son of a wealthy banker, was born in 1903 in Budapest, Hungary. He was a prodigy who would have had the ability to remember entire books; before joining the IAS, he had already written an influential book on the mathematical foundations of quantum mechanics. In 1935 von Neumann visited Cambridge University in England. There he met a young mathematician named Alan Turing *38, who was working on fundamental problems relating to the mathematics of computability. Intrigued by Turing’s research, von Neumann encouraged him to come to Princeton.

After graduating from Cambridge University, Turing arrived at Princeton in 1936 to begin his doctorate. under Alonzo Church, professor in the Department of Mathematics. Between 1936 and 1938, Fine Hall was home to Einstein, von Neumann and Turing, three of the most legendary names in physics, mathematics and computer science – the last being a field that didn’t even exist at the time. These three fields would come together at Princeton to give rise to the fields of Numerical Weather Prediction and Numerical Climate Prediction.

In a landmark 1936 paper, “On Computable Numbers, with an Application to the Entscheidungsproblem”, Turing designed a universal computing machine with an infinite tape – a tape on which the computing machine could read symbols, write symbols, or erase at many times. The web could move forward or backward under the direction of the machine. This conceptual machine, now known as Turing’s machine, could perform any computation involving well-defined steps. Turing used this hypothetical construction to show that there were numbers that could not be calculated using this machine. This led to the conclusion that there was no general computer procedure for proving whether a computer program would eventually stop. In essence, Turing had invented a universal computing machine to prove the limits of computing. This article is one of the foundations of the field of computer science.

At Princeton, Turing continued to work on computational issues. However, with the offices of luminaries such as von Neumann and Einstein right next to him, he felt his own work would go unrecognized. After Turing completed his Ph.D. in 1938, von Neumann tried to persuade him to stay by offering him a research position at the IAS, but Turing decided to return to England. In the years that followed, von Neumann continued to be fascinated not only by the idea of ​​building computing machines, but also by the possibility of their practical utility.

Among IAS mathematicians, von Neumann was somewhat odd. He could stand out among theorists like Einstein and Kurt Gödel, the great mathematical logician who had visited and later been recruited to the IAS. Gödel’s work is about as theoretical as it gets: he is famous for proving the incompleteness theorem, which demonstrated the limits of mathematics and inspired Turing’s work on the limits of computation. But, unlike Einstein or Gödel, von Neumann was very interested in the useful application of “useless knowledge”, i.e. the practical applications of science such as hydrodynamics, meteorology and the design of ballistic and nuclear weapons.

Both a physicist and a newly appointed computer scientist, von Neumann realized that computers could be used to predict the weather from basic physical principles. But the Turning Machine, while a beautiful concept, was not a practical computer design. (It required an infinite band, for example.) So von Neumann set out to design and build an electronic computer at the IAS. Because of the potential military applications of such a computer, von Neumann was able to convince the United States Atomic Energy Commission and various military agencies to fund this costly endeavor. While waiting for the construction of the IAS machine, von Neumann would use the world’s first general-purpose computer, the Electronic Numerical Integrator and Computer (ENIAC) – which was designed by another scientist interested in weather forecasting.

From The weather demon by Ramalingam Saravanan Copyright © 2022. Reproduced with permission from Cambridge University Press

[ad_1] May 13, 2021 Atmospheric acidity is increasingly established by organic acids, such as formic acid and carbon dioxide. The former contributes to the development of aerosol particles as a precursor to raindrops and thus affects the pH of rainwater and cloud growth.. Diagram of the main emission sectors and primary emissions, meteorological and chemical […]

[ad_1] Apr 7, 2021 In recent decades, the Tibetan Plateau, called “the roof of the world”, has warmed faster than the world average. Projected future warming of the Tibetan plateau in the CMIP5 ensemble. The thick lines indicate the multi-model ensemble means, and the shadows indicate the 90% model intervals, derived from the raw model […]