The country is reeling from the effects of climate change, with the majority of the population staring hunger in the face after the rains unexpectedly disappeared during the 2021/22 summer agricultural season.

World leaders have come up with ideas to tackle the negative effects of climate change which have led to more flooding, extreme weather and out of control veld fires, among other things.

The use of fossil fuels came to the fore when it was discovered that they were the main drivers of global warming due to their emissions.

Western countries led by the United States of America and Britain called for a ban on the use of fossil fuels, especially coal, and pledged US$100 billion a year until 2025 for a smooth transition from coal to other cleaner energy sources by African countries.

The West, however, has not kept its word and African countries have complained that it takes them three to five years to get funding approved and released.

Coal-dependent African countries, such as South Africa, Botswana and Zimbabwe, have called on the West to honor its promise by releasing the promised funding.

Despite empty promises from the West and the collective efforts of regional blocs such as the United Nations (UN), the Southern African Development Community (Sadc) and the Common Market for Eastern and Southern Africa (Comesa) To try and get the West to honor its promise, each country has made individual efforts to access funding projects in an effort to tackle climate change.

It should be noted that South Africa, following a meeting between President Cyril Ramaphosa and his American counterpart Joe Biden, the United States pledged an $8.5 billion partnership to help Africa in the South to finance a faster transition from coal which will serve as a model for other countries. 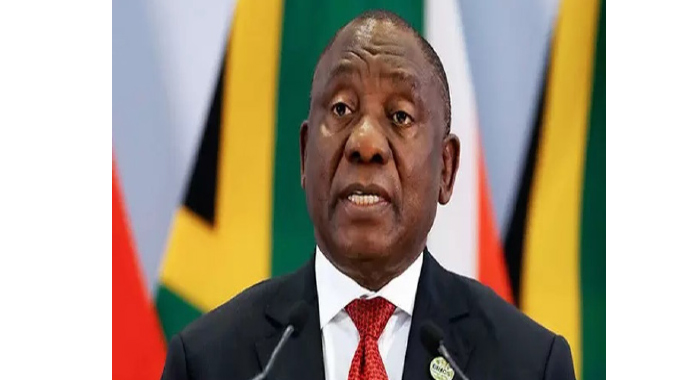 For Zimbabwe, however, this is a unique situation as the country is waging war on multiple fronts given the illegal sanctions imposed on it by the West.

Climate change is a global phenomenon with actions to be implemented locally and in the process of implementation a lot of funding is needed for both mitigation and adaptation.

Funding opportunities like the Green Climate Fund have been created for this reason with the pooling of resources from developed countries which also influence its accessibility.

Sanctions have influenced funding levels and countries like Zimbabwe will continue to suffer from a lack of access to funding.

The West wants Zimbabwe, which generates around 70% of its energy from coal, to stop using the natural resource, but it is unwilling to fund the projects.

President Mnangagwa was not silent on this and vowed to “never stop” using coal and reminded developed countries that they had reached their current status using the same resource. Zimbabwe aims to cut carbon emissions by 40% by 2030, and President Mnangagwa wants developed countries to support vulnerable nations that contribute the least to climate change.

The President has always publicly stated that lifting sanctions against Zimbabwe will help the country meet its commitments to fight climate change and that the country is open to investment in green industries.

While Zimbabwe suffers from global warming caused by greenhouse gas emissions, the country is a “net sink” that absorbs more carbon than it releases.

President Mnangagwa said the challenges of climate change have led to an increasing frequency of severe droughts and floods caused by cyclones.

“This, coupled with the economic sanctions imposed on us and the Covid-19 pandemic, has had negative impacts on the people of my country. Notwithstanding the fact that as a country we are “a net sink”; I am pleased to note that Zimbabwe has revised its Nationally Determined Contributions and committed to a conditional target of reducing greenhouse gas emissions by 40% per capita by 2030.

Comprehensive strategies are also being implemented to integrate adaptation and resilience to climate change into all sectors of our economy,” he said recently during the roundtable at the Presidential Summit of the Green Revolution Forum in Africa 2022. He applauded regional bodies like Sadc, Comesa and the AU for supporting Zimbabwe in removing illegal sanctions.

“As a country, we are grateful to the African continent and Comesa for strongly calling for the lifting of sanctions.

As a country, we have an added burden of sanctions that makes it difficult for us to receive climate change funding. Lack of funding will therefore make it difficult to achieve our NDCs and other economic ambitions,” he said.

Comesa has also expressed concern recently saying that the illegal sanctions are also having a negative impact on combating the effects of climate change for the regional bloc.

In an interview on the sidelines of a Comesa regional preparatory meeting for COP-27 in Harare recently, Comesa’s climate change project manager, Mr. Lwembe Mwale, said the sanctions were affecting collective mitigation efforts. and adaptation which are crucial in the fight against climate change in the region. “If the country is under sanctions, it means that there are no financial flows into the country for any reason, including climate change. This is why regional bodies like Sadc and Comesa are stepping in to jointly mobilize resources for climate change programs where Zimbabwe is part of those programs,” he said.

Mr Mwale said it was important for Zimbabwe to be included in these programs to counter sanctions and help the country achieve its NDCs, Vision 2030 and climate change commitments under the Paris Agreement.

There is a need for Comesa member states to do more to mobilize climate finance and put in place climate change policies as the region reels from climate change, says he.

“According to the latest IPCC report by climate scientists, we are not on track as a region to meet the 1.5 degree temperature target.

But also, if you look at the negative impact of climate change in the region, it increases; we have more floods, more droughts. This shows that the climate crisis is growing in terms of impact,” he said.

But the country has not received adequate funding since 2000 due to sanctions and this has stifled climate action in Zimbabwe,” he said.

If the fight against climate change is genuine, sanctions must be lifted unconditionally.

As we head towards COP-27, African nations should continue their call for the unconditional lifting of sanctions as they negatively impact not only Zimbabwe but the continent as a whole. [email protected]

“Our business has evolved quite significantly to use the same tools with the same premises and modeling frameworks, but to underpin decisions with a different level of credibility and scale,” she said. Upgrade Around one-fifth of global carbon output comes from agriculture, so decarbonizing the sector could play a critical role in meeting emissions targets. […]

Algal blooms can endanger humans and animals. (Photo credit: ASM Microbes and Climate Change Report.) Microbes may be small, but they have a huge impact on environmental and human health in a changing climate. the American Society for Microbiology (ASM) published a new report, Microbes and climate change: science, people and impactsco-authored by David Karla […]

[ad_1] Senior science advisers and presidents of national science academies from more than 20 countries have signed a statement to leaders of world governments reiterating the existing scientific consensus and the need for immediate action to tackle climate change. The signatories call on world leaders to develop â€œambitiousâ€ long-term strategies based on solid scientific evidence […]